It's all in your tone font face

It's all in your tone font face 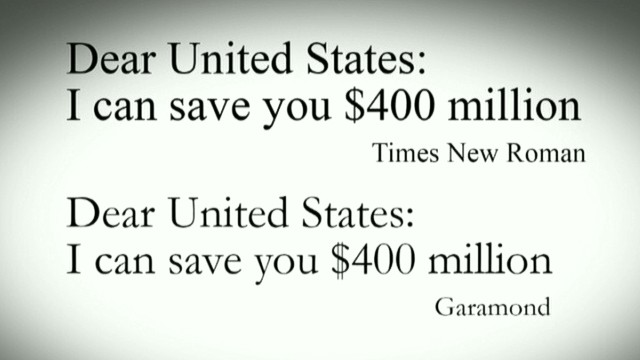 Turns out if you’re the US Government, something as simple as changing the font face on your hardcopy printouts can save you up to $400 million per year.

14-year-old Suvir Mirchandani has discovered, as part of a Middle School Science Fair Project, how to the US government can $US400 million per year. And the answer is simple:

Switching their font from Times New Roman to Garamond.

Suvir discovered in completing the assignment, that by using Garamond with its thinner strokes and lighter weight, his school district could reduce its ink consumption by 24%, and in turn save as much as $21,000 annually.
His teachers, impressed with the finding, encouraged him to submit his work to be published in the Harvard University run Journal for Emerging Investigators (JEI).  Sarah Fankhauser, one of JEI’s founders, says that of the nearly 200 submissions they have received since 2011 Suvir’s project was a real standout. Keen to push the analysis further, JEI posed Suvir the question “How much potential savings is really out there?” and challenged him to apply his project to a larger scale: the US Federal Government

With an annual printing expenditure of $1.8 billion, and the General Services Administration’s estimated annual cost of ink — $467 million —  if the US federal government used Garamond exclusively it could save nearly 30% — or $136 million per year. An additional $234 million could be saved annually if state governments also jumped on board.
An interesting observation Suvir made:

“Ink is two times more expensive than French perfume by volume,” he said with a chuckle.

#pondersquietly
Despite the fact that you and I are unlikely to have an annual $467 million dollar ink expenditure (but hey, thats just a rash generalisation), we can still implement a simple fontface change in our office or  home, and in turn reduce the amount of ink we use / make savings.
Food for thought.
EP.